Today Show Halloween 2018: See the anchors alongside their '80s inspirations 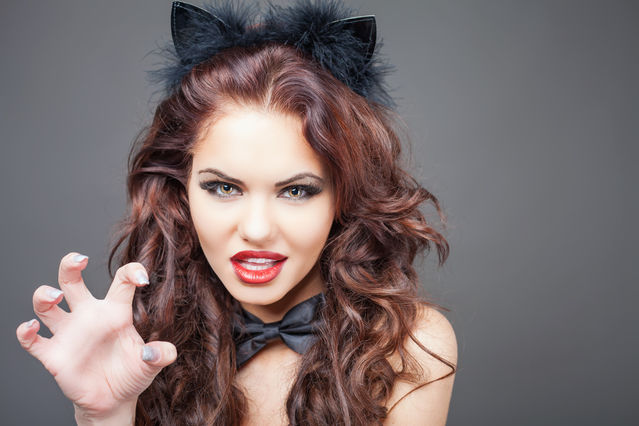 5 easy DIY Halloween decorations for under $20 See how the TODAY anchors’ kids dressed up for Halloween

For parents, sugar highs and Pinterest-fail costume attempts can be a downside of Halloween.

But according to a non-scientific survey conducted by TODAY Parents, the thing that gives moms and dads the biggest fright this time of year is seeing young girls dressed in overly sexy costumes. This nerd costume for young girls is available at Spirit Halloween.

A whopping 62% of parents surveyed agree they're tired of seeing little kids dressed up in skimpy outfits while trick-or-treating, and Maryland mom Jennifer Diamond agrees. Parents who pull off impossible costumes are Halloween heroes

"No child of mine will ever wear a sexy outfit," Diamond told TODAY Parents. "If I allow my child to dress up like that, what am I teaching her?" This girls' wolf costume is available at Target this Halloween.

"I feel like we need to teach our daughter's self respect," said Diamond, who has a 12-year-old daughter named Sarah. "They are worth more than their looks."

A quick online search for girls costumes turns up short-skirted versions of police officers, clowns, wolves and more. And, more often than not, today's little girls' costumes involve a small amount of sheer fabric and a spaghetti-strapped or low-cut bodice.

Put on your own oxygen mask first. In other words, take care of yourself or you can't be a fully engaged parent. Parents who deprive themselves of rest, food, and fun for the sake of their kids do no one a favor. "People feel guilty when they work a lot, so they want to give all their free time to their kids," says Fred Stocker, a child psychiatrist at the University of Louisville School of Medicine, in Kentucky. "But you risk getting squeezed dry and emotionally exhausted." A spa weekend may not be realistic, but it's OK to take 15 minutes for a bath after you walk in the door. (A tall request for a kid, yes, but a happier Uno player goes a long way.) Running ragged between activities? Ask your child to prioritize, says Taylor. She may be dying for you to chaperone a field trip but ambivalent about your missing a swim meet—the ideal amount of time for a pedicure. This short-skirted police officer costume is available at Spirit Halloween.

Lisa Sanders, who also lives in Maryland, says when her daughter, Addy, was in first grade, she bought her a bumble bee costume that was several sizes too big just to cover her body in a way she deemed appropriate. "For a little kid costume it was pretty slinky and form fitting," Sanders explained. "So I bought her a size 12-14 so it actually looked like a normal costume for a kid her age."

TODAY Tastemaker and child development expert Dr. Deborah Gilboa says while parents are justified in feeling that kids costumes often fall a little too far on the sexy side, it's up to them to make and enforce rules about their kids' Halloween attire. Repeat: I am not a short-order cook. "It's a child's job to learn to eat what the parents eat," says Ellyn Satter, a registered dietitian and the author of Secrets of Feeding a Healthy Family. Instead of the all-or-nothing scenario, offer a variety of foods at mealtime: the main course, plus rice or pasta, a fruit or vegetable, and milk. This way, your child can eat just the pasta and the peas and get protein from the milk. "What a child eats over the course of a day or a week is more important than a balanced meal at one sitting," says Stephen Daniels, the chairman of the department of pediatrics at the University of Colorado School of Medicine, in Aurora.

"If your child is 15 or younger, it's totally developmentally appropriate to guide her not to dress as an adult," said Gilboa, explaining that often 'sexy' costumes are not direct representations of the animal or character depicted, but are a grown-up slant on that character.

'Inappropriate' Halloween costumes are only bad if we let them be

Take Emma Blake, for instance, who wrote a piece for the Daily Telegraph just yesterday about how she "turned white" when her seven-year-old daughter announced that she wanted to dress up as Calamity from the popular video game Fortnite for Halloween. Dr. Deborah Gilboa says that sexy costumes, like this leopard costume from Party City, are often meant to be versions of grown women dressing as an animal or character.

Gilboa says for elementary-aged kids, this explanation should suffice, adding that it's when kids get into middle and high school that parents may struggle to enforce their dress code rules.

"For middle schoolers or young teens it is totally reasonable to explain the commercialization or sexualization of costumes and Halloween and why you aren't willing to let your daughter be a part of that yet," said Gilboa. "Many middle schoolers will understand being exploited by society and be willing to push back against that. Even if they're not, you're the parent and this is your call."

Teach your baby to sign. Just because a child can't talk doesn't mean there isn't lots that she'd like to say. Simple signs can help you know what she needs and even how she feels well before she has the words to tell you - a great way to reduce frustration.